175 anniversary of the Guardia Civil

The Guardia Civil institution reached 175 years of existence last May 13, 2019. Since its founding in 1844, it has remained continuously side by side with the Spanish society, serving with dedication, professionalism and vocation. This is the reason why today, more than ever, Guardia Civil is an institution that belongs to everyone, a Meritorious Corps that provides not only security but also conveys confidence and closeness.

The 175 anniversary was commemorated by a Military Ceremony held on May 13, 2019 and presided over by Their Majesties the King and Queen of Spain. In addition, many initiatives and commemorative activities have been scheduled throughout the Spanish territory all year round, whose aim is to bring even closer the institution to the society by sharing and letting people know about the tasks performed by Guardia Civil and its commitment to service. Among these activities, we can remark the commemorative exhibition held in Madrid from 28-14 May this year, which was visited by thousands of citizens.

After a turbulent summer in 1843, in September general elections were called in Spain. The progressive and the moderate parties attended in the form of a coalition, with the intent to provide the political stability needed. With the same purpose and in order to avoid a new regency, the Government elected as a result of this process agreed to claim that Queen Elizabeth II would reach her legal age on October 10, the day she was turning 13 years of age. A month later, she swore the Constitution in the palace of the Senate and her reign started. One of the first legislative initiatives by the Ministry Cabinet established on December 9, 1843 and chaired by Luis González Bravo, was to reorganize the Public Security and Protection Branch. This resulted in the publication of the Royal Decree of 26 January 1844, which was the starting point for the creation of Guardia Civil.

The situation of insecurity in Spain due to banditry was indeed discouraging. In many areas, the roads were at the mercy of groups of criminals.
For this reason, there were many unsuccessful attempts since the beginning of the century to create an effective security body at a national level.
Subsequently, in March 1844, the Government decided that one of the most urgent laws to approve in order to establish the foundations of the new liberal State, was the one related to the Civil Guards, complemented by their rules of procedure. In fact, work had already been done in this project before the passing of the Royal Decree of 26 January, which provided for the creation of a task force aimed at safeguarding people and property effectively. This project led to the first founding Decree of 28 March 1844, on the creation of the Guardia Civil Corps, with the aim of “providing good order, public security and protection for people and property within and outside the urban areas”.

The Ministry of War was trusted with the task of organizing this new Corps, and the General Francisco Javier Girón y Ezpeleta, Duke of Ahumada, was chosen to prepare a detailed report that revealed significant gaps in the model proposed. His findings provided the basis for the drafting of the final founding Decree, which reorganized the Guardia Civil institution to enable its implementation under the new Government led by the General Ramón María Narváez. On May 13, 1844, the Queen Elizabeth II signed this Royal Decree, establishing the final rules for the organization of Guardia Civil and endowing the institution with its military nature.
The Guardia Civil institution was born this way, to address the pressing need of the Spanish society of a professional, permanent and respected security force at a national level, capable to eradicate the problem of banditry that had taken over many areas in the countryside of Spain. It was imperative not to let down the great expectations placed on them.

In addition, the intended modernisation process relied on an effective integration of the territory. The new Corps would contribute to this end by providing safety in the growing communication routes and extending the presence of the State as much as possible, reaching even the smallest settlements in our territory.
The Guardia Civil started to work underpinned by a civilian-military system of relationships and connections that provided the Corps with the projection and balance needed to deal with a dramatic start and a sustained development. Additionally, this paved the way for the new Corps to find its place among the State institutions, and favoured its integration with a population that longed for higher levels of security and stability. Thus, it soon became an effective tool under the command of the Government, which deployed the new force since the beginning throughout the national territory.
To achieve this goal, it was crucial the decision to trust the organization of the new institute to the General Francisco Javier Girón, who was subsequently appointed as first General Inspector of the Guardia Civil Corps on September 1, 1844. The expectations placed on the Duke of Ahumanda were more than successfully met. His personality, values, organizational skills and his unquestionable leadership capacity were crucial, and he knew how to use these virtues to serve the creation of Guardia Civil. He was also able to find the best partners to achieve this goal.

Through this, the initial arrangement of the first contingent of civil guards was carried out in two military training centres near Madrid between May and October, 1844. Surrounded by numerous difficulties, at a frantic pace and in a period of time surprisingly short, a thorough and demanding selection and training of staff was carried out, as well as the provision of the necessary equipment. This made possible the rapid deployment that the provincial authorities were insistently demanding. Those men were instiled with the spirit of the Corps and the defining values of the best military tradition that should represent the new Institute. They also had to learn the new regulations and, more important, how to deal with the complex and unexpected situations that they will have to face in their daily service, when confronted with dangerous criminal groups in the open field.

The subsequent deployment of civil guards all over the national territory was a major change, not only regarding security and protection for people and property, but also for the Spanish administrative arrangement. One must take into account that State public servants were deployed and brought closer to the citizens in a way that have never been done in Spain before, granting Guardia Civil the unifying nature attributed to the institution since its origin.
Soon after Guardia Civil had started to work, the Duke of Ahumada identified the need of drafting a code of conduct to serve as a moral reference for all the civil guards in their professional performance and also in their daily performance. Therefore, he drafted himself the Cartilla de la Guardia Civil, approved by Royal Order of 20 December, 1845, bearing his distinctive founding seal. Its first article is well-known, and defines honour as the hallmark of each and every civil guard, as well as the duty to preserve it unblemished. In the rest of the first article of the Cartilla, the Duke of Ahumada clearly develops his idea about the civil guards, detailing in depth their expected performance at every moment, as well as the discretion and proportionality that should govern their response to the various situations that they will have to face. That code of conduct became a part of the future generations of civil guards as a distinctive sign of the institution’s culture.

From then on, Guardia Civil deservedly won its prestige, year after year and Government after Government, culminating in the Spanish Transition, the constitutional framework born in 1978 and till the present.
For this reason, today we can assure without a doubt that Guardia Civil is the first police force established in Spain with a comprehensive scope throughout the national territory, and fully competent with regards to security since its very creation.

Since then and for 175 years, Guardia Civil renews everyday its commitment to serve the citizens. This commitment is built on its principles and values, while keeping a dynamic evolution according to the times.
Values such as a meritorious character, honour, self-sacrifice and spirit of service, along with the principles of the military nature and political neutrality that are a part of the Guardia Civil identity, keep reinforcing and bonding the force as an Institution.
Today, Guardia Civil is present in our seas, our mountains and our roads. They provide their services underground, ploughing through our skies, monitoring cyberspace and taking part in various areas in the international environment. All together this shapes the complex array of duties that characterizes Guardia Civil as an integral and modern police Force, involved in homeland security but also in the need of ensuring security beyond our borders, providing responses based on international cooperation.

Likewise, it is important to emphasize that Guardia Civil supports the presence of the State throughout the Spanish territory, including a commitment to public security that always covers from the less populated areas to the urban and suburban ones.
As for the future, Guardia Civil is committed to explore the best ways to be ready for any emerging danger that could threaten Spain and its people. To this end, and as they have done until now, Guardia Civil will continue to update its mentality, its heart and its structures to adapt itself and to anticipate whenever possible the challenges of this new society.
The prestige and achievements gained by the Institution would not have been possible without the effort and professionally of the men and women that make up Guardia Civil, and who are its most important asset.

For this reason, the Corps actively works in improving their work conditions and the measures designed to reconcile family life and working life, not only to increase the number of female civil guards, but also to promote training and education within Guardia Civil.
In this regard, emphasis must be placed in the historical milestone reached during the last academic course, when more than 100 students from the French National Gendarmerie attended the Academy of Guardia Civil (Colegio de Guardias Jovenes) in Valdemoro for training, and this year, when a company of Guardia Civil students received training at the Gendarmerie Academy in Dijon. The aim of these experiences along with other counterpart forces is to provide the basis for a major European project on joint training.

In conclusion, we can say that Guardia Civil is proud of its past, optimistic about its present, and it looks forward to its future with great excitement and enthusiasm.
Certainly, thanks to the tireless effort of its members, who will contribute to pave the way to the bright and promising future that the institution deserves and has characterized its history up to now, Guardia Civil will keep working to improve even more and to remain side by side with our citizens for at least another 175 years. 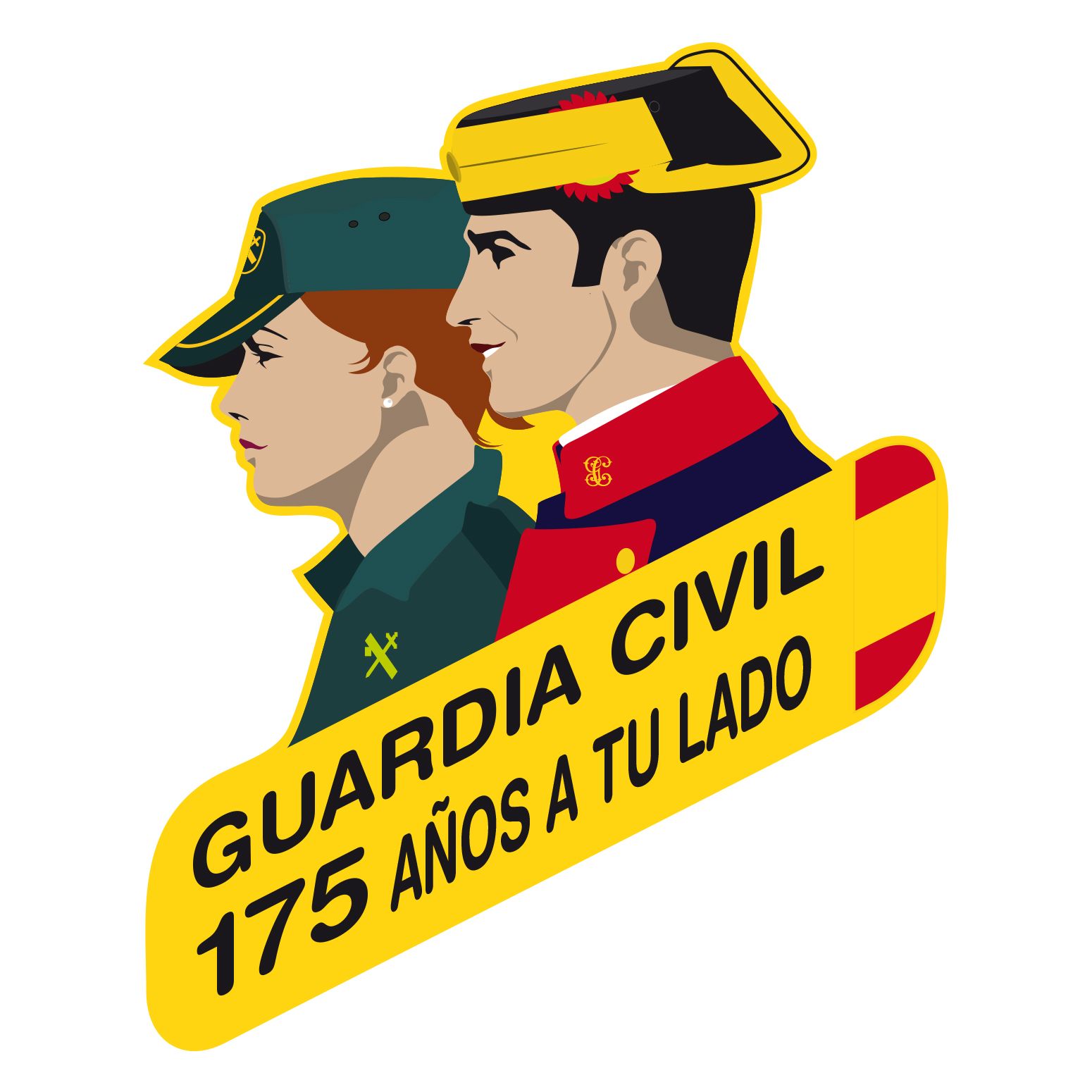